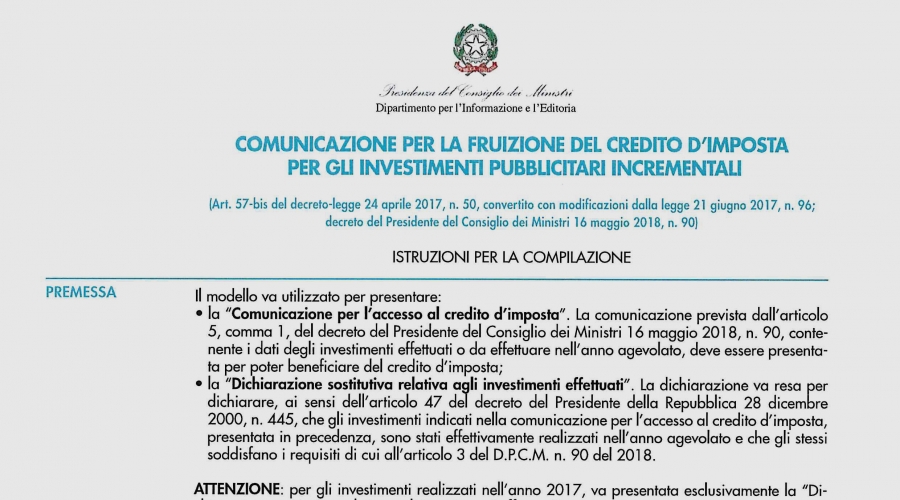 With the publication in the Official Gazette of the  Prime Ministerial Decree (D.P.C.M.) of May 16, 2018 no. 901, finally, the application provisions of the tax credit introduced by art. 57bis of the Legislative Decree 50/20172 for advertising investments have been notified. 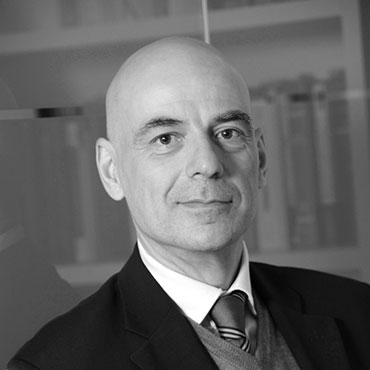 Who can benefit from the tax credit:

Investments in advertising campaigns are facilitated:

With effect from 1 January 2018, provided they are incremental by at least 1% - percentage to be calculated for each media channel - with respect to the similar investments made on the same media in the previous year.
Advertising investments made from 24 June 2017 to 31 December 2017 are also eligible, but limited to advertising campaigns in the daily and periodical press (also online).
In this case, the value of the investments must exceed at least 1% the amount of the similar investments made on the same media during the period 24 June 2016 - 31 December 2016.
Reimbursement of the expenses for the purchase of advertising space and commercial listings3, net of ancillary costs, brokerage costs and any other expenses other than the purchase of advertising space, even if functional or connected to it, are included in the discount.
The eligible expenses are considered to be incurred according to the criteria set out in Article 109 of the Consolidated Text of the Laws on Income Tax (TUIR) and their implementation must result from the appropriate certification issued by the persons entitled to issue the compliance visa on tax returns or by a statutory auditor.

The tax credit is recognized as equal to 75% of the incremental value of the advertising investments made.
This percentage is high - subject to the successful completion of the notification procedure to the European Commission - 90% in the case of micro-enterprises, small and medium-sized enterprises (recommendation 2003/361 /EC) and innovative start-ups (L.D. 179/2012 , Article 25).
The subsidy is granted in compliance with the limit of the budget resources annually allocated, which constitutes the ceiling to be allocated; in the case of insufficient resources available with respect to the admitted requests, the same will be divided between the beneficiaries.
For advertising investments made in 2018 and those made from 24 June 2017 to 31 December 2017, 62.5 million Euros have been allocated.

The tax credit is alternative and not cumulative, in relation to the same items of expenditure, with any other facilitation provided for by state, regional or European legislation unless subsequent provisions of the same regulatory source do not explicitly provide for the cumulation of the facilities themselves.

In the period between March 1 and March 31 of each year, the subjects involved in the facilitation must present an "electronic communication" to "reserve" the tax credit for the current year's investments using the attached model in copy.
For the year 2018 and for investments made from 24 June 2017 to 31 December 2017, the electronic communication must be presented in the time window from 22 September 2018 to 22 October 20184.
The adoption of the provision for the assignment of the tax credit actually usable by the requesting parties will be made within 120 days of the publication of the Prime Ministerial Decree (D.P.C.M.) (24 July 2018) and therefore by 21 November 2018.

How to use the tax credit and declaratory obligations

The tax credit can only be used for offsetting using the F24 model to the extent indicated by the Department for information and publishing through the appropriate provision. The tax credit must be indicated in the tax returns relating to the credit accrual tax periods and in the tax returns relating to the subsequent tax periods up to that in which the use is concluded.

Controls and causes of revocation

The tax credit will be revoked if the non-existence of one of the envisaged requirements is ascertained or if the submitted documentation contains untrue elements or the declarations made are false.
The partial revocation of the tax credit is provided only in the event that the assessments carried out contain elements that only influence the measure of the benefit granted.
If the Revenue Agency or the Italian Finance Police, as part of the ordinary control activity, ascertain the possible undue or total use of the tax credit, the same will provide to inform the Presidency of the Council of Ministers for the purpose of revocation of the same.

1Regulations containing the methods and criteria for the granting of tax incentives for incremental advertising investments in newspapers, magazines and on local television and radio broadcasters, pursuant to Article 57-bis, paragraph 1 of the Decree-Law of 24 April 2017, no . 50, converted, with amendments, by Law 21 June 2017, no. 96. (18G00115) in Official Gazette no. 170 of 24 July 2018.

3The expenses incurred for the purchase of advertising space for teleshopping, forecasts, games or betting with money winnings, voice mail or chat-line with overpriced services are excluded from the discount.

4Starting from the sixtieth day and within the ninetieth day following the publication date (24 July 2018) of the Prime Ministerial Decree (D.P.C.M). in the Official Gazette.